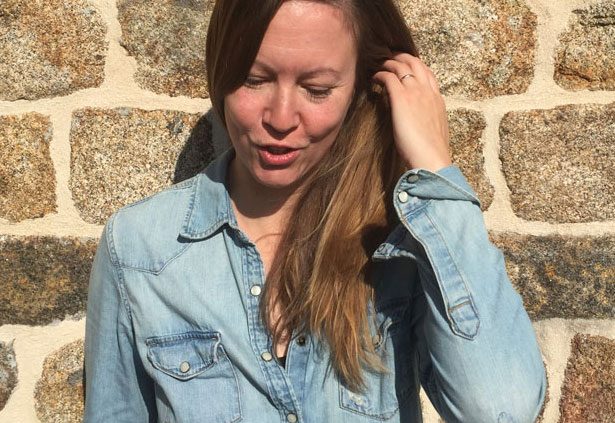 My mother-in-law asks about lunch at breakfast, then about dinner at lunch. Often she’ll ask about the next day’s meals even before dinner. Her questions take the form of, “So what if we ate that smoked salmon tomorrow?”

Her name is Andrée. She retired early after enduring a stroke that left her hemiplegic. She can walk, but only very slowly and dragging one leg with an uncooperative and twisted foot at the end of it. With such limited mobility, her pastimes are also pretty limited. It’s no surprise that she obsesses on food so much, what else has she got to do?

She loves seafood, charcuterie, and an array of sausages and processed meats such as andouille (typical of our region of Normandy) and galantine. She eats sweetened store-bought crêpes for breakfast and puts sugar in her coffee. Other meals are often three or four courses (entrée, plat, fromage, dessert), and she eats her cheese with a large quantity of butter. She’s a good eater.

When she comes to visit from her coastal town of Rochefort, the first thing we do is go to the grocery store. Not that we haven’t already tried to stock the kitchen with her favorite things, but she likes to shop and we invariably forget something. Also, in the case of her most recent visit, the Holidays. So stores are closing and over-crowded before they do, best to be prepared. I’ve gotten used to shopping with her — we’ve got a routine. She goes along at her own pace, and I dash off left and right collecting things and bringing them back to the shopping cart.

We always have a list, but of course the fun thing to me about grocery shopping is being inspired by whatever looks good at the time. “Oh, that pork roast looks tasty and is at a good price.” “Yum, those parsnips look particularly fresh and smell lovely.” I’m an impulse shopper: if it looks good, I buy it. Andrée is also a bit of an impulse shopper, but she is not assertive. Everything is a passive question with her. “How about if we take a turkey leg?” And so the incident began…

I really had no desire to either cook or eat a turkey leg, but I get to do what I want all the time. We only see her once or twice a year, so I do what I can to make our visits pleasant. If she wants a turkey leg, then a turkey leg she shall have. Although I do warn her that any andouille purchased is leaving with her on the train. On the morning that I decided to do the turkey leg for lunch, I started prepping the vegetables first and pre-heated the oven. I didn’t have a recipe in mind, as I often don’t. I usually just take the Jamie Oliver approach to baked dishes: coat heavily in olive oil and season, then pop it in the oven ’til it’s done. This has worked brilliantly for me time and again for all kinds of dishes including chicken, pork and fish — veggies on the bottom or around the edges with the meat in the middle or set on top. Quick, easy, delicious.

After an hour in the oven, nothing was cooked through. Not the carrots and potatoes, and definitely not the turkey. I had slept in that morning, and with the big lunch scheduled hadn’t eaten breakfast. That was my first mistake. I’m still not sure what my next mistake was — the oven has been on the fritz lately, but I cook a lot and haven’t had any problems with temperature, just a few of the dial settings not working so I don’t use those anymore. Maybe I shouldn’t have covered the pan for the first 20 minutes? I definitely should have turned the turkey leg over, because it had a thick piece of skin on that I imagine was preventing the heat from penetrating properly. But that didn’t explain the vegetables. More than an hour to cooked cubed carrots and potatoes is unheard of.

I got grumpy. I was starving. I started cursing (to myself) the turkey leg and my mother-in-law. I was also embarrassed. My husband refers to me as the “best cook in the world”, and here the meal was a total flop. Andrée just kind of looked at me helplessly suggesting that maybe she should have indicated cooking times to me. That did not help.

I started pulling cold-cuts and leftovers out the fridge suggesting other things to them to eat. I had lost my appetite. Actually, not really, I was starving, remember? But nothing sounded good anymore, I was too much in a mood. I left them with a bunch of stuff on the counter, nibbled a few cold pigs-in-a-blanket, told them to make due and stormed off to brood in my office.

Then I felt like an asshole. It didn’t take me long to make my way back out to the world, head held low and still starving. And to my surprise Olivier and his mom were setting the table. We had flipped the turkey leg over and left the lot in the oven, and it was finally done. Or done enough. I begrudgingly sat down at the table, thanked them and tried to put on a smile. I still couldn’t bring myself to eat the turkey, which I blamed for everything, but the veg was nice.

My smile was only half-cocked and I said something — I don’t recall what — but it was enough to make Andrée upset and she started apologizing and blaming herself for the fiasco. I really wanted to scream at her and tell her how much her incessant questions drove me mad. I wanted to say, “Yes, it’s all your fault.” I wanted to tell her to stay out of my kitchen and let me handle things my way. I wanted to tell her that I hated her cooking and found her eating habits abhorrent.

I said none of those things. Instead, I took her by the hand as she started to cry (she is very fleur de peau), and in a very soft, gentile voice I said, “Please, I’m sorry. It’s not your fault. Please forgive me, I’m being a jerk.” I surprised everyone in that moment, especially myself. After repeating the words a few times Andrée stopped crying, then we all cursed the turkey leg in unison and ending up having a good laugh.

The truth is, it was no one’s fault. It was just one of those unfortunate incidents that tests us, and although I’m not proud of the way I initially reacted, I’m glad it happened. Andrée and I are nothing alike. Our routines are different, our eating habits are different, our tastes in almost everything are very different. But she’s my mother-in-law, and we’re stuck with each other. I don’t dislike her, we just don’t have anything in common — except her son.

I’m glad it happened because it taught me something. I realized that she and I both like food. Ok, maybe not the same kinds of food, but still, it’s a common ground. I also realized that we both like talking about food, we just don’t talk about it in the same way. I was taking her passive question-asking as an affront rather than an opportunity to communicate. Everything that I find put-offish could be an occasion to get to know one another. Maybe, if we sat down and planned meals out together next time, she might stop phrasing everything as questions and start to feel more at home. Maybe I would stop feeling like the information booth at the shopping mall or some kind of gatekeeper. Maybe we’ll discover that we have more in common than we think.

But then, what are the Holidays without some kind of unfortunate family incident?