Nowadays I delete about 4 out of 5 tweets that I write. Only 1 of 5 only ever gets published. Why? Because I try to avoid reactive, negative tweets, and anything without intrinsic value. (And yes, I consider my own amusement and that of others to have intrinsic value).

So sometime between last night and this morning, this happened: 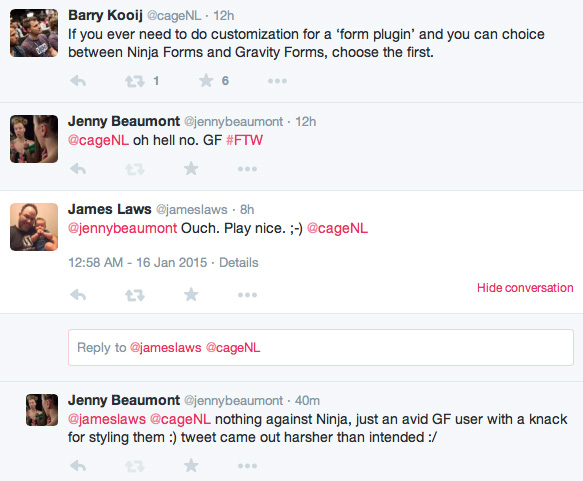 I have nothing against Ninja Forms. I tried it once many years ago, but didn’t make it very far because they had a very flashy menu button in the admin. That never would have flown with my client, so I moved on.

I used Contact Form 7 for a while too, but ultimately found it too limited and felt the interface to be a bit clunky.

One day I started using Gravity Forms and never looked back. I love it because it is very complete—you can do just about anything with it—and I find the interface very intuitive and easy to use. Though I have heard people say that it’s difficult to style. In the same way some people say “all WordPress sites looks alike” (*cringe*), I’ve heard the same said for Gravity Forms.

The above tweet is not a big deal. I’m sure that James and Barry don’t suddenly think I’m a horrible person because of it. But this brief interaction seems like a great opportunity to talk about some things that are important to me.

It is entirely possible (and probable) that when Barry talked about “customization”, he was talking about something other than styling. Maybe he was referring to more advanced programming and not just making things pretty.

It is also entirely possible that Ninja Forms has toned down their admin menu item since I last saw it, and that if I started using it today I would love it. I’m not saying this because I feel bad about that not-well-thought-out tweet. I’m saying it because these days I see valuable lessons everywhere, ideas that I want to keep in the forefront of my mind.

But wait, you were expecting a showcase on Gravity Forms, not a rant about communication.

Yes, the idea I had wanted to convey was that styling Gravity Forms is easy, once you get the hang of it. Extending it has proven easy too, though I admit I hire out for advanced features. Here are a few examples of both simple contact forms, and more complex dynamic forms I’ve done recently.

Using Gravity Forms, just like with WordPress, with a little imagination you can do just about anything.