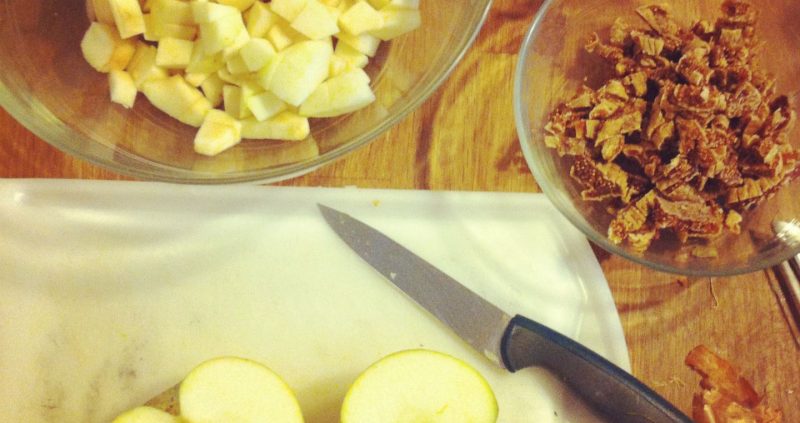 How about a little crossover, shall we? Because as much as I created this blog as an outlet for all things unrelated to work, ultimately life (mine in any case) is never completely compartementalized. I think that’s a good thing.

If you follow me on social networks or read my professional blog, you may know that back in October I took a trip to Leiden for the first annual WordCamp Europe. I had only ever been to the Netherlands once before, many years ago. I can’t say I know much about Dutch cuisine – the only memory I’d had of it was of falling upon a cozy pub in Amsterdam somewhere and being served up a big tasty bowl of thick, hot stew.

Our first night in Leiden was great, but far from local fare. I think I had a burger. But the second night, a bunch of us made a date to meet at Pannenkoekenhuys.

Given my reluctance to use roaming, getting lost even with the help of Google Maps was all the more embarrassing, and by the time I finally arrived at the “pancake house” (that’s what I’m calling it), everyone was already well dug into their meals. Luckily Aloisia had ordered a lot, and was willing to share her pannenkoeken with me. I had never heard of a pannenkoeken, and it was like nothing I had ever tasted. Similar to French crêpe, but twice the size, somewhat chewier, and with a penchant for pineapples. As a side, they were served with “delicious sauce”.

I’m not sure if that’s actually the name that was used on the menu, but that’s how it came to be known, and we are still talking about it to this day. I couldn’t tell you what was in it, just that it was savory and sweet, somewhere in between an Asian dipping sauce and a chutney. I loved it. Everyone else thought I was crazy.

So I decided to make them chutney. Wouldn’t you?

As our merry band of potes formed on this trip as the result of the initiative Very French Trip, and in memory of that unique if not unidentifiable sauce at the Pannenkoekenhuys, I have dubbed this chutney, Very Delicious Sauce (#VDS). And it is very delicious indeed.

Put everything in a large pot over medium heat and bring to a slow boil. Stir and wait until the sugar has dissolved before turning heat down, then allow to simmer for a good 2 hours. Make sure and stir frequently to avoid sticking – you’ll know it’s ready when you can pass your spoon through and it’s thick enough to leave a trail behind. While still hot, fill into sterilized jars, seal, and turn upside-down to allow to cool. I like Le Parfait terrine jars the best!