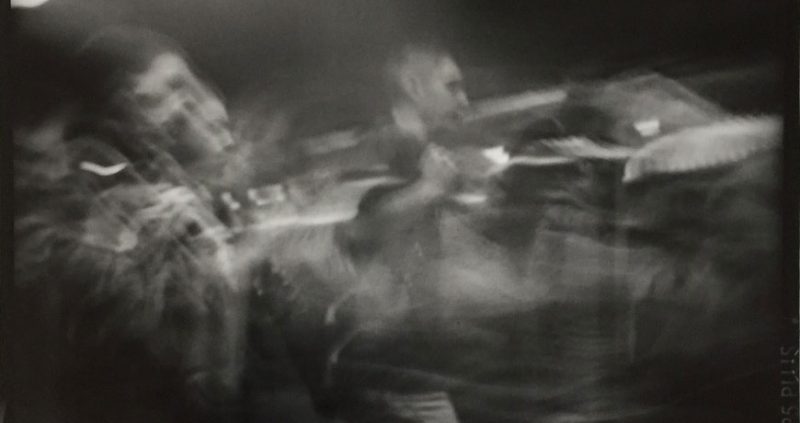 “You don’t take a photograph, you make it.”
―Ansel Adams

When I was heavy into photography, what I loved most was the process.

Starting with that first moment I looked through the lens, framing the scene around me from my unique perspective. Certain details would interpolate me: a shadow, a reflection, a mood. Certain angles would intrigue me: peeking through a passageway, sweeping across an open expanse of floor or field, hovering from above. Certain subjects drew me in: a weathered face, the gradient color of morning sky, the geometry of everything.

In the days before digital, the process afforded a panel of choices and with each step, the possibility to influence the image in some way. From the film format to the film type to the choice of camera, each variable created a number of unknowns waiting to be discovered. Grain, contrast, film speed, lenses and filters, and even some of the quirky effects of the cameras themselves—pinhole or plastic cameras with their infamous light leaks and vignetting—contributed to the quality of the final image.

From there the film would be developed and mounted in an enlarger to be printed on any assortment of papers. Each step of the process was an opportunity—or a risk—of transforming the image in some way, no matter how small.

While some photographers search for realism in their work, I was always more fascinated by how the process resulted in images that my eye alone couldn’t see. The delight of making photographs for me came from the whimsy and serendipity of exploration, trial and error that transformed the world as I saw it when I released the shutter into something new and unexpected.

“In Hollywood if you don’t have a shrink, people think you’re crazy.”
―Johnny Carson

I resisted the idea of therapy because I grew up thinking it was for crazy people, or at the very least people with emotional problems and that clearly couldn’t be me.

I found myself in distress following a breakup that left me in a precarious and emotionally abusive situation, and a friend finally convinced me to go see her therapist. She told me that I could trust her therapist, that it was someone who kept things simple and had helped her in the past.

Distraught, I caved and made an appointment.

I continued to resist at first. The woman was austere, unwelcoming, and while the room was pleasant enough, the short 20-mintue sessions made me anxious. I didn’t know what to say. I didn’t know how therapy worked. I told her as much, but she gave me few prompts.

When the time was up, there was no lingering. She would stand up and go open the door, inviting me to leave. I recall ending one session in tears and stopped on the way out to ask her if my mascara was smudged. Not a peep. She just sort of grimaced and nodded to the open doorway.

After a few sessions, I finally started talking. Really talking. The more I talked, the more I wanted to talk, the more I felt like I had been waiting my whole life to talk. It was the most liberating feeling I had ever known.

You see, one of the reasons that I thought I couldn’t possibly benefit from therapy was because I thought I knew everything. I had all of these ideas in my head about what had happened, how I felt, what I needed and what my choices were – I had had all of the conversations already, by myself, in my head. I had rationalized it all to death and I still felt miserable and trapped.

I discovered that those ideas, once spoken, took on new meaning. When I heard them out loud and bounced them off the stoic face of someone unequivocally on my side but who saw me, my situation and my ideas objectively, I came to realize that I knew very little. My thoughts were not fixed, static or final. Some of them were down right ridiculous and once spoken, those same beliefs that had seemed so serious and unwavering in the confines of my mind dissolved.

Therapy helped me out of a bad situation. Its greatest benefit, however, was that it taught me not only how to talk, but the real value of talking. Getting all of those thoughts and ideas locked inside the confines of our minds out into the world so that they may be transformed into new understanding, relief, freedom.

“Something that you feel will find its own form.”
—Jack Kerouac

I always sit down with an idea, a theme, a sentence, a memory. There is some inkling of a beginning, of something I want to say, share, explore. I used to try very hard to stick to that idea, with the feeling that I set out to do something and so should finish it. That resulted in a lot of half-written drafts and bad feelings.

“I have trouble finishing what I start.”
“My ideas are shit.”
“Who would want to read this?”
“What am I trying to say?”
“I’m doing it wrong.”

Until I started to let go and just write. One day I sat down with my inkling, and instead of trying to push it along and turn it into what I thought it should be, I let it pull me along and transform itself into what it was.

Even now as I write this final paragraph I feel the urge to want to control, to shape, to know, to be several steps ahead. Instead I resist and enjoy each step of the process and the whimsy and serendipity of discovery. Instead I just put my thoughts and ideas out there and let them be transformed as they take on new meaning and give me new understanding. Instead I play with filters and let myself be drawn into and intrigued by angles and moods, all the while guided by a simple underlying principal: that making these connections from a place of honesty and authenticity can allow me to contribute value and beauty to the world.