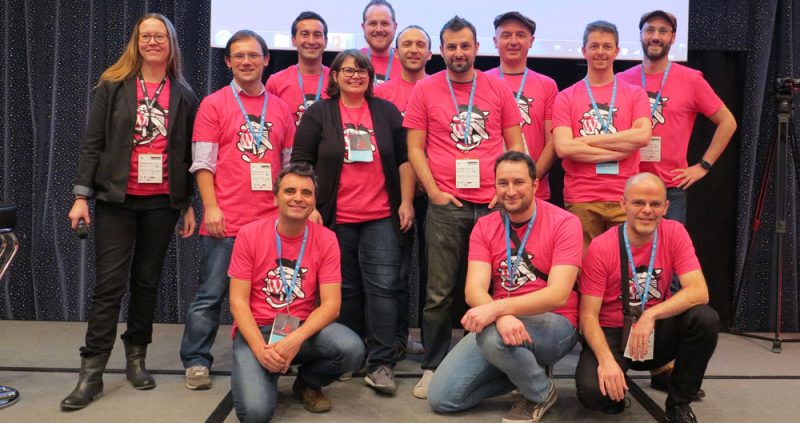 I recently had the honor (and challenge!) of leading the team that organized the largest French WordPress event to date: WordCamp Paris 2016.

There have already been lots of great reviews about the WordCamp; about the 32 talks, the change in venue and the networking opportunities. For me, the event itself was like slaving over a meal all day long, only to scarf it down in minutes. This two-day conference was the culmination of almost six months’ work. So, rather than write yet another recap, I thought I’d reflect on what drives my ambition as a volunteer, and on what I learned taking on a leadership role.

I first got involved with event organization as part of a university student group, The Cultural Forum, responsible for bringing talent of all kinds to the UofO campus—musicians, speakers, artists—to animate student life and offer reprieve from academics.

Starting out as a volunteer on the security team, where help was needed corralling attendees and watching for gate-crashers, I quickly moved up to become the Security Coordinator, and finally Regional Music Coordinator. We each managed our own yearly budget to produce everything from a weekly Beer Garden with local bands, to concerts with both regional and national acts, and an annual Folk Festival.

I had a rough time leaving home to go off to school over 500 miles away, and didn’t have much academic drive until my senior year when things started coming together for me. Being a part of that group kept me sane, kept me grounded. It gave me purpose. And my teammates and our staff advisers became my second family, my home away from home.

Twenty-some-odd years later, I started to renew my interest in volunteer work through a new type of event. It was at a time in my life that I was rebuilding—again—and feeling isolated as a freelancer. I was in need of some human contact, some IRL interaction.

Attending such events is a great way to meet people, to learn and to find inspiration. Getting involved in these events through volunteering, whether it’s as a speaker, a day-of volunteer or an organizer, takes the experience to a whole new level, putting you in the middle of the action where those connections are facilitated and even amplified. Like with the university student group, these people who I’ve gotten to know over the last few years have become like a second family – so much so that we have our own hashtag! #WordPressFamily smile

Volunteer work is its own reward

For anyone unfamiliar with WordCamps, neither speakers nor organizers of these events are remunerated. They are 100% volunteer-run, financed at cost through sponsorships.

I hear some of you asking, “But can’t you get the same sense of purpose and connection and get paid?”

As a freelancer, collaborations can be very rewarding, but for me nothing has yet to compare to the reward I’ve felt getting involved in the WordPress community. Without its community, WordPress wouldn’t enjoy the popularity it has today, running one out of every four sites on the web. I started specializing in WordPress because I consistently got the answers I needed when I turned to the forums or social media for help, which was never the case with other content management systems I’d experimented with. After several years of gaining expertise and making money off a free download and continual free tech support, it felt only natural to want to give back and be a part of what makes WordPress so great.

Leaders set expectations (and the tone)

I was not the obvious choice to lead the WordCamp Paris organizing team. I had only been on the team for a year, and I don’t live in Paris so am not active in the local Meetup. Nor did I have much experience leading large teams. But as circumstances would have it, the usual suspects weren’t readily available. There was a need to fill, and when I put my name out there I was genuinely surprised to be met with a unanimous round of, “yay!”

Based on the feedback I’ve gotten, I did a pretty good job. In the beginning, however, I made two glaring mistakes.

The first was assuming that everyone on the team knew what was expected of them, an assumption I made because there was only one new person on the team from the previous year. But, it was a false assumption just the same. We were not the same team; we were not in the same roles and we were not duplicating the same event. Clearly communicating roles, responsibilities, overlap, processes and a global vision, are all essential to creating a constructive team dynamic.

The second was trying to compartmentalize each of the poles, in a an attempt to streamline the process. As volunteers, we all also have full-time jobs, families, a personal life. The idea was good-hearted: not waste people’s time with unnecessary meetings that didn’t concern everyone all the time. But it was also naive, because part of the enjoyment and the motivation is the camaraderie that comes with being a part of the team. The whole team! Segmentation is necessary for the practical purpose of accomplishing tasks, but when it comes to communication, a team is the sum of its parts. A fragmented team is not a strong, happy team.

It’s true that being a leader comes with responsibility. You are the go-to person for problems, conflicts and a lot of decision making. It’s easy for this to become personal. It’s easy to be afraid that any failures reflect on you personally, and inversely that any successes do as well. And because we naturally strive for success and seek to avert failure, it’s also natural to want to try and control the outcome of every action to the best of your ability.

This can translate into micromanagement, which is the bane of any team.

The goal of leadership is not to do the job of the team. The goal of leadership is to empower a team to do its job, to pave the way for them to meet their success and failure head-on, to rejoice with them for each win, and to help them recover from any loss or difficulty. This requires trust and ultimately, selflessness. Leaders can only succeed or fail in their leadership. Only the team as a whole succeeds or fails in its mission.

A team is only as strong as its ability to rally

We all have difficulties. We can all be weak at one time or another. Maybe there is a skill we haven’t mastered, or that the role assigned to us simply isn’t in our wheelhouse. Maybe we get sick. Maybe we have a family emergency. Maybe we have a problem with another team member. Maybe we misunderstand. Maybe we are misunderstood.

Focusing on the weakness of individuals does nothing for the team or the mission. A strong team knows how to adapt, how to pick up the slack when and where it’s needed and how to offer support to a member in need. In my experience, when a member can truly no longer perform, they tend to leave of their own accord. And until they do, a leader owes it to each member of the team to rally around them, to encourage them, to find solutions, to keep energy high and to pave the road to success.

2 thoughts on “Thoughts on volunteer work and leadership”